There are different rules for the different types of games. With community card games such as Hold’em and Omaha, everybody shares part of the hand, while in Stud games each person is dealt cards, some of which are hidden and some of which are face up. For Draw games each person is dealt their own cards but can exchange some or all of them for new ones, and in High/Lo Split games  the pot is divided between the best ‘high’ and ‘low’ hands.

Poker games typically feature a forced bet, such as the Big Blind and Small Blind in Hold’em and Omaha or the Antes and Bring-In in Stud. These forced bets comprise the starting pot in any given hand of poker, which is the first incentive players have to win the hand. Action arising from the subsequent rounds of betting further increases the size of the pot.

Poker is the name given to a number of card games where players wager on the strength of the cards they hold. Poker is a game that involves a communal “pot” consisting of the players’ wagers, which is awarded to the player who either holds the highest ranking hand when all the cards are shown, or makes a wager which their opponents are unwilling to match. Like most games, the aim of poker is to win. Whether you’re playing for fun or for money, poker will test your skills and strategic abilities.

There are many varieties of poker games but they all follow the same basic format:

All poker games begin with some forced wager over which poker players compete. In Seven Card Stud, there are two forced wagers, an ante and a bring-in. In other games, the forced wagers are a small blind and a big blind (and sometimes also an ante). In any basic poker game, players strategically wager using a number of actions available to them. The actions are as follows:

If the last bet or raise on the final betting round is called, a “showdown” occurs. This is when it is determined who wins the pot,as players show their hands one-by-one. It may be the case that there is no showdown. This occurs when a player bets or raises, and no active players choose to call the player’s bet (in other words, all players fold). In this case, the player doing the betting or raising wins the full amount of the pot.

At the end of the hand, players remaining have options regarding the showing of their hand:

If there’s only one player left in the hand before the showdown, they can choose to either show or not show their cards. If you prefer to never show your cards in this situation, check the ‘Don’t Show Winning Hand’ option in the ‘Options’ menu of the main lobby. If this option is not checked, you will be offered the option to show after each winning hand.

If the hand goes to showdown, the winning hand is always shown automatically.

At the showdown, players whose hands cannot beat the best hand shown so far can choose to show or not show their cards. If you prefer to never show your hand in this situation, check the ‘Muck Losing Hand’ option in the ‘Options’ menu of the main lobby.

All players dealt into a hand have the right to see mucked hands that reach the showdown, on request. At PokerStars, these cards are shown in the Hand History and Hand Replayer for each hand. Mucked cards will only be shown to players dealt into the hand. To see Hand Histories from the current session, go to ‘Requests’ > ‘Display Instant Hand History’ in the lobby. To replay any hand, click ‘Visualize’ from the Instant Hand History window, or click the red ‘replay’ icon at the top of the table. Real money hand histories can also be requested by email, by going to ‘Requests’ > ‘Hand History’ in the main lobby. 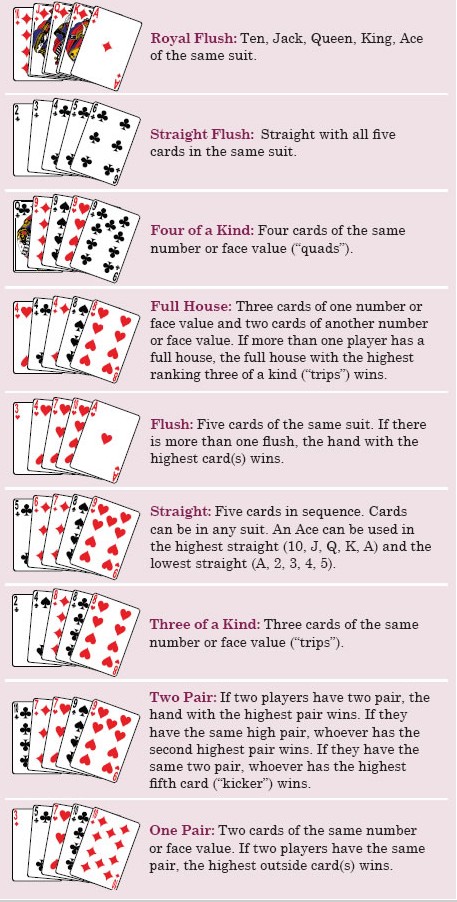 While Poker is played in innumerable forms, a player who understands the values of the Poker hands and the principles of betting can play without difficulty in any type of Poker game. Except in a few versions of the game, a Poker hand consists of five cards. The various combinations of Poker hands rank from five of a kind (the highest) to no pair or nothing (the lowest):

Five of a Kind – This is the highest possible hand and can occur only in games where at least one card is wild, such as a joker, the two one-eyed jacks, or the four deuces. Examples of five of a kind would be four 10s and a wild card or two queens and three wild cards.

Straight Flush – This is the highest possible hand when only the standard pack is used, and there are no wild cards. A straight flush consists of five cards of the same suit in sequence, such as 10, 9, 8, 7, 6 of hearts. The highest-ranking straight flush is the A, K, Q, J, and 10 of one suit, and this combination has a special name: a royal flush or a royal straight flush. The odds on being dealt this hand are 1 in almost 650,000.

Four of a Kind – This is the next highest hand, and it ranks just below a straight flush. An example is four aces or four 3s. It does not matter what the fifth, unmatched card is.

Full House – This colourful hand is made up of three cards of one rank and two cards of another rank, such as three 8s and two 4s, or three aces and two 6s.

Three of a Kind – This combination contains three cards of the same rank, and the other two cards each of a different rank, such as three jacks, a seven, and a four.

One Pair – This frequent combination contains just one pair with the other three cards being of different rank. An example is 10, 10, K, 4, 3.

No Pair – This very common hand contains “nothing.” None of the five cards pair up, nor are all five cards of the same suit or consecutive in rank. When more than one player has no pair, the hands are rated by the highest card each hand contains, so that an ace-high hand beats a king-high hand, and so on.

Put your knowledge to the test at: